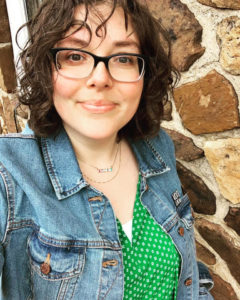 Why You Joined JLS:

I joined JLS to serve my community and to expand my circle of friends. I knew a group of dedicated women can accomplish anything, and I wanted to be a part of that.

Fall Home Tour is by far my favorite. I love seeing the unique homes and decorating styles.

During my first DIAD event, we helped a local church host a Christmas party for families of limited resources. We provided the food and a local radio station provided armloads of toys. The looks on the children’s faces of pure joy were only eclipsed by the looks on the parent’s faces of relief and gratitude. It was a good night.

Life outside the League:

By day, I’m a former journalist turned writer/editor in the Drury University Marketing & Communications department – who secretly wishes she could be a full-time baker. I’ve been married to my best friend, Adam, for nine years and we have two wonderful furbabies – cats named Chuck and Eddie. We’re big supporters of the arts in Springfield and live for a good road trip and a good sandwich – many of which can be found together.

I once interviewed actor, pro wrestler and former governor of Minnesota Jesse Ventura when he came on the Ozarks to film part of his television show, “Conspiracy Theory.” The episode attempted me make a connection between the illuminati and the large Pensmore Mansion in Christian County. The show was terrible, but he did take time to sign an autograph for my husband using his famous line from “Predator.”